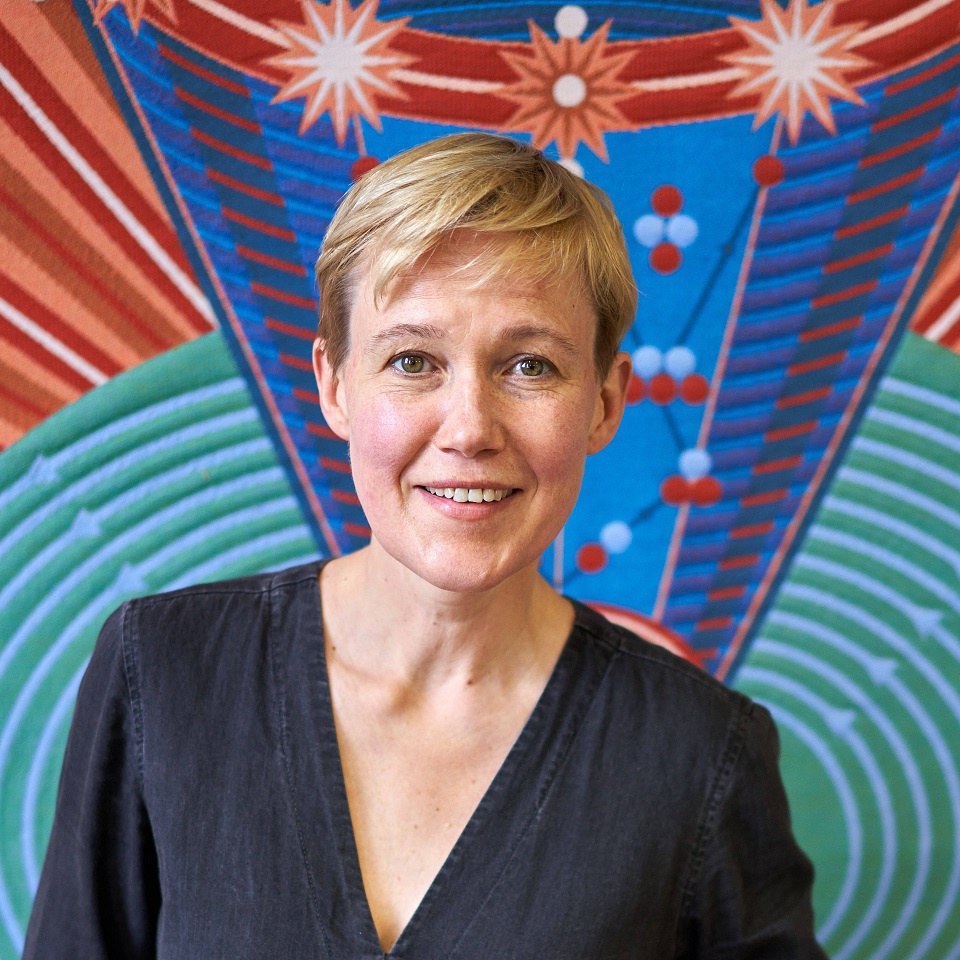 Installation. Courtesy of the artist

Too Hot to Handle is a project, which addresses the nuclear history and materiality. Popova’s research into nuclear heritage reflects on her background: she grew up in Ozyorsk, Russia, a secret access restricted town, and the birthplace of the Soviet nuclear-weapon program. Popova has lived and worked in the United Kingdom for many years now, so in 2018 she started to explore nuclear landscapes around the UK visiting decommissioned nuclear sites.

Popova has produced two tapestries, Keepsafe (I and II), as architectural propositions for the tombs or mausoleums for the decommissioned reactors. The central figures depict the graphite cores of first-generation Magnox nuclear reactors and later Advanced Gas-cooled Reactors (AGRs). The half-life of the contaminated graphite core containing radioactive carbon C-14 is approximately 5,000 years. It takes 100–200 years for the reactor to cool down. So these massive objects – contaminated wombs of the first generation nuclear reactors, veterans of the Cold War will stay for centuries on the shores of the UK, in the forests of Russia and deserts of the USA. Are they part of our industrial heritage or just the source of danger? The architectural forms reference Lenin’s mausoleum located on Red Square in Moscow. The artist sees decommissioned nuclear reactors as essentially close to the idea of a mausoleum, because these reactors, like mummies, are dead but not buried.

Popova also created a display structure for the stones she collected on her journeys. The structure replicates the shapes of the reactor’s contaminated graphite core. The stones represent the industrialized landscapes and the Deep Time — each has its own geological age, which is much larger than the whole human history. Scientists proposed a new geological epoch Anthropocene to mark the significant human impact on Earth’s geology and ecosystem. The first radionuclide fall out after bombing Hiroshima and Nagasaki must be the day it started. Just as in Buddhist tradition the Scholar Rock Display creates a space for meditation on the deep connections between our nuclear industry, the landscape and the passage of time.

Yelena Popova was born in 1978 in Ozyorsk, Russia. Since 2003, she lives and works in the United Kingdom. Yelena studied at Moscow Art Theatre School (MXAT) before graduating from MA Painting at the Royal College of Art. She was selected for "Bloomberg New Contemporaries" (2011) and "New Sensations" (2011). In 2014, she was shortlisted for the Arts Foundation Award in Painting and selected to be part of Thames and Hudson’s new publication 100 Painters of Tomorrow. In 2016, her work was included in Vitamin P3 (The 108 International Artists Revolutionizing Painting Today), published by Phaidon Press.

Yelena’s work often reflects her upbringing in the Urals, and is also influenced by Russian Constructivism, trying to capture the continuous industrial development and the landscape of contemporary capitalism. Growing up in a secret Soviet nuclear settlement, she often turns her attention to nuclear history and heritage. Yelena is part of the Nuclear Culture research group led by Goldsmiths University, London.