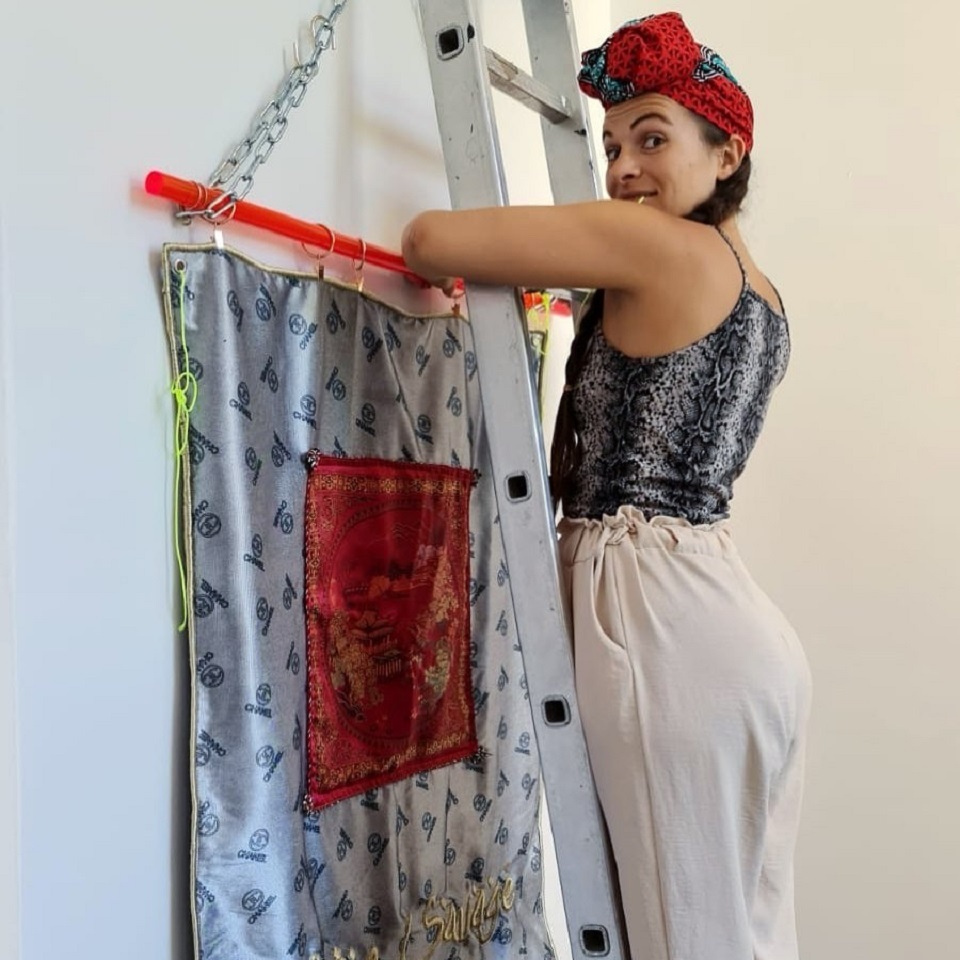 Exhibition at the Optical and Mechanical Plant features artworks:

Objects within human societies are given meaning through various transactions, motivations, motifs of use and circulations. The idea for the work was sparked by a research on the representation and installation of Indian textiles inside the art-historical Western museum and exhibition context. The phenomena of decorating exhibited textiles with “exotic” plants, follows the same logic that made the mastery of textile works one of the main reasons for Western colonization of the Indian subcontinent. The textile industry, in turn, has been the main pillar for India’s liberation movement.

Many present day tourist markets like the Silk Street in Beijing, the Metro Station of the STM in Shanghai, the Papyrus Institute in Luxor or the Khan el Khalili Bazaar in Cairo have catered their products through positioning themselves as havens of Otherness. The neo-colonial aspects of global intellectual property projection on local markets make the public presentation and trade of counterfeit-goods a “dark, mysterious, exotic” adventure — the possibility to maintain a feeling of superiority through purchasing cultural backwardness wrapped in a plastic pseudo-traditional form.

The works are part of a multidisciplinary work cycle that deals with the embodied manifestation of cultural exotification in the virtual and physical object. Research on Western desire for consumption of difference is the basis for a feverish dreamscape, consisting of lenticular prints, tapestries, sound installations, objects and video work.

To bring together visitors and artworks under the umbrella of possibility Cafe Contingency unites pre-existing textile works, a site specific spatial performance, a collaboration with craftsmen in Moscow and a new video work, that is the result of a trans-disciplinary joint action.

With her installation, Anna Ehrenstein activates the interiors of the Ekaterinburg Circus, one of the most striking architectural monuments of the late Soviet modernism era. During the Biennial, the installation Cafe Contingency will function as a real cafeteria, located inside the circus, at which one can mingle and have a snack.

The central piece of the installation is a premiere video work The Albanian Conference, a contemporary revision of the first conference of Afro-Asian writers held in Tashkent in 1958. To revisit this historical event, Ehrenstein invited artist and curator Fadesh, Afrobeat musicians DNA and dancer Rebecca-Pokua Korang to her native Albania. The newly awakened alliance has been born from an incredibly charged social and political moment, one of continuous environmental degradation, global pandemic, militarized police force, relentless racism, casteism, border brutality, and dramatic social inequality.

Anna Ehrenstein is a German artist of Albanian origin, who was born in 1993 and lives between Berlin and Tirana. She investigates the exchange of people and objects within a postdigital and neocolonial condition.

She studied photography and media arts and took part in curatorial workshops that form the basis of her collaborative practice. Her works have been featured in international group exhibitions including Situations at Fotomuseum Winterthur, Switzerland (2019), the photography festival Les Rencontres d’Arles (2018), and Pablos Birthday New York. Her first institutional solo exhibition at C/O Berlin is going to travel to the Landesmuseum Linz in October 2021. Ehrenstein has been nominated for several prizes, recently received a DAAD grant for a research project in Bogota, Colombia, and a research scholarship from the German Senate.